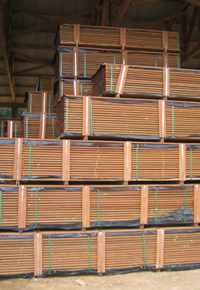 We’ve touched on some of the unique issues that come up as a result of working with Ipe and other extremely hard tropical decking lumber species, before, but it bears repeating — and going into more detail.

Getting the Right Cut

A lot of decking lumber is quartersawn, in order to accomplish two goals: achieving maximum stability, which is needed for exterior applications, and showcasing consistent vertical grain striping on the faces of the boards. There is a downside to this tendency, though: The internal structure of the tree ends up getting exposed. Referred to as “medullary rays,” these mechanisms are used to transport nutrients from the exterior portions to the interior portions of the tree. These extremely dense areas appear as light-colored stripes and can feel raised and rough. As you might expect, the density of medullary rays keeps them from being able to be easily and smoothly planed. They may require touch-up later on with a sander.

Waiting the Right Amount of Time

Make no mistake about it: Ipe is an extremely stable species. However, any decking species contains a higher percentage of moisture than does interior-grade lumber. They’re usually air-dried, instead of kiln-dried, usually to a moisture content ranging from 14 to 18%. If the boards were kiln dried to a moisture level below 8%, they would inevitably soak up plenty of moisture during the first rain they encountered, producing warping and cupping. Retaining a higher level of moisture content allows the boards to avoid large swings in moisture levels and the kind of rapid expansion that can occur, as a result. Of course, different climates respond differently, making an acclimatization period an absolute necessity.

All decking lumber needs time to come into equilibrium with the moisture levels of its environment, prior to installation. It needs to be stored away from direct sunlight, in a well-ventilated area, for 2-3 weeks either at the job site or somewhere with a climate identical to the job site. During this period, you can expect your decking boards to expand or contract by as much as 1/8 inch on a 4-inch-wide board or ¼ inch on a 6-inch-wide board. Trust us: You want this kind of movement to take place before the wood is affixed to a rigid sub-structure.

Once the decking boards have been installed, they will still need to move as they respond to seasonal shifts in moisture levels. In order to accommodate that movement, make sure the deck is designed with proper ground side ventilation, which is particularly important for ground-level decks. A well-ventilated deck will allow boards to expand and contract in a uniform way.

One added step you can take to reduce movement after installation is to apply end sealant anytime the decking boards are cut to length, exposing end grain, that “bundle of straws” that sucks up and sheds moisture so readily. When moisture change occurs quickly, splits and checks appear, decreasing the beauty of the deck. AnchorSeal is the sealer we use here at J. Gibson McIlvain Lumber, and it’s a wax-based coating that slows moisture loss and absorption.

For more information on J. Gibson McIlvain’s lumber products and services, call Monday-Friday toll free (800) 638-9100 to speak with one of their representatives.