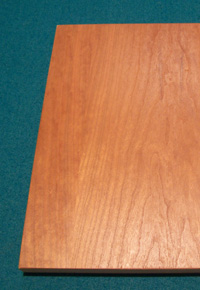 Formaldehyde, the compound that provides adhesion between the various wood chips and fibers, produces a dangerous byproduct called off-gassing. Due to its production of that dangerous toxin, formaldehyde is considered a Volatile Organic Compound (VOC) as well as a carcinogen. This chemical can be life-threatening to individuals with breathing problems, such as asthma, or young children who are considered to have a higher risk of upper respiratory issues. It’s also been listed among 20 potentially cancer-causing agents in need of further research, in order to find more evidence of such a major vice.

In order to limit the potential negative effects of the formaldehyde, sealants are often employed. However, various issues can cause toxins to be released: age, cutting, excessive use, general wear and tear. One result of the great potential for harm that comes from formaldehyde is the establishing of emission limits for HWPW by the California Air Resources Board (CARB); some groups within the industry, such as the Hardwood Plywood and Veneer Association (HPVA), have supported the national expansion of CARB standards. Beginning in 2009, the qualifications required for third-party certification by groups like CARB have included performance properties of the materials in addition to their compliance with emission limits. While most HWPW is tested when in its unfinished state, some—such as engineered wood flooring (EWF)—is tested as a finished consumer product, as well. With the lowest emission standard of any regulated composite wood panel products regulated by CARB regulations, HWPW has been subject to a limit of 0.05ppm since January 2010.

In addition to the health concerns over the use of formaldehyde, environmental concerns exist as well. In coordination with the EPA, a third-party certification program for “green building” has arisen. The Leadership in Energy and Environmental Design (LEED) is nationally recognized for its support of healthful, profitable building design and operation. LEED standards include the use of certified materials. The factor in materials certifications by LEED that’s most significant to HWPW is the use of low-emitting materials in the production of composite wood and agrifiber products. The goal is to eliminate the use of added formaldehyde resins. The cited intentions of this certification include reducing indoor air contaminants that negatively affect the health and comfort of installers and occupants of areas where these products are used.

As continued testing, certification standards from third-party organizations, and safer manufacturing techniques continue to emerge, you can trust the experts at J. Gibson McIlvain, one of the lumber importers and wholesalers in the United States, to provide you with the information you need to make informed decisions about the HWPW that you need.