Eli Hendrick was born in 1832 in Plymouth, Michigan and entered adulthood as an apprentice wood turner, cutting and sculpting wood as it spun at very high speeds. Hendrick learned to manufacture everything from table and chair legs to baseball bats (the game still in its infancy) and porch pillars. He served as a rider for the Pony Express in Iowa before moving to Franklin, Pa. in the mid-1850s to try his hand at oil refining, an endeavor which earned him a limited degree of success. But Hendrick would become known for his proficiency in another burgeoning industry, and the company he founded in 1876 is still in existence today.

Eli Hendrick founded Hendrick Manufacturing with the money he earned through the sale of several oil patents to John D. Rockefeller’s Standard Oil. Relocating to Carbondale, Pa., Hendrick became intrigued with the potential profits he perceived in the coal industry, and applied his knowledge of refining techniques to develop a more efficient method of separating and sorting the coal.

The filter presses used at the time were simple mats of wire and canvas which would easily rip and tear, requiring constant replacement. Eli Hendrick saw an opportunity to remedy this problem by replacing the wire-and-canvas mats with metal sheets with perforations to serve the same function yet have a much longer lifespan. After several initial attempts at punching holes individually into the sheet metal – a process which was far too inefficient – Hendrick invented a machine capable of drilling many holes simultaneously in a uniform pattern. This was the forerunner to the modern perforating press, and the invention on which the Hendrick Manufacturing Company was built. 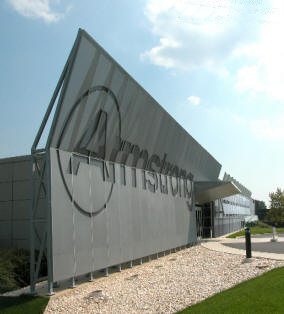 134 years after Eli Hendrick first developed an efficient way for punching holes through metal, perforated metal sheets and panels can be found almost anywhere. Architects and developers value perforated metals for their durability and customization potential. Many different metals can now be perforated in patterns to suit just about any style, environment, or building.

Architects have also recognized perforated metals as excellent for a range of other functions, such as enhancing the acoustics of a room, providing traction in areas with heavy foot traffic, and shielding buildings from excessive sunlight. Perforated metal panels are still used in industrial settings, as well. Grilles and grating can be found at construction sites and on factory floors, where their resistance to damage and rust make for great filters and drains.

Hendrick Manufacturing provides these services and more, as they have since Eli Hendrick drilled those first holes on a sheet of metal. View a recent article in Metal Architecture magazine regarding Hendrick Architectural Products.