The popularity of Ipe is likely much more than a passing fad. This reddish brown wood has been said to include magical qualities in that it maintains a remarkable stability and strength, even in the harshest of environments. Because it does not require dry time, it can go from forest to job site with minimal wait time. Its hardness and durability are unrivaled by any other wood, and with moisture content ranging from 12% to 15%, it can be found outside private homes as well as on famous boardwalks bombarded by the public. As you might expect, this premium wood comes with a premium price that’s arguably warranted by its top-tier performance. 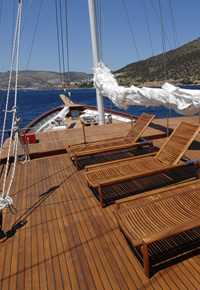 Also known as “Brazilian Teak,” this wood is not much softer than Ipe. However, stability and shrinkage can be problems, so kiln drying is a necessity. While it comes in two attractive variations, yellow and red, the latter is more popular, probably because it’s similar to the coloring of Ipe. Even though shrinkage can be an issue when Cumaru is used in a dry area, the wood’s hardness and high density make it a suitable alternative to Ipe, at less than 70% of the price.

Also known as “Goncalo Alves,” Tigerwood is named for its brownish orange coloring and dark stripes, like that of a tiger. In time, it darkens to a deep reddish brown, similar to Cumaru and Ipe. The striping certainly gives this wood a distinctive look, but it can also be a challenge if your goal is to achieve a consistent appearance. While stable in most climates, Tigerwood does require kiln drying. Used for both outdoor applications such as decking and interior applications, this wood is far from experiencing a shortage. An additional down side of Tigerwood is that it can be slippery to those with bare feet.

With an open grain and reddish brown appearance similar to Mahogany, Cambara is softer and less dense than other decking species. When it’s kiln dried, it is stable, though, and it beats out domestic options such as Redwood and Red Cedar. The price is similar to those domestic species, while still being classified as a tropical hardwood decking option.

Other tropical hardwood decking options include Massaranduba and Garapa, and J. Gibson McIlvain can provide you with any of those woods, as well as Cambara, Tigerwood, and Cumaru. At the end of the day, if Ipe is what you really want, you won’t be satisfied with any other option. We carry an extensive inventory of Ipe, since it is still the most sought-after decking product that we have.